School Porter in the Tuck Shop

Lunch with the Head Master

The Registrar reading the newspaper

Boy about to receive BCG injection

Boy in his room

Crossing the stream in Paradise Woods

Waxing the floor in the Dining Room

Tea break in the School Kitchen

Girls watching 'The Young Ones' on TV

I was in my final year at Exeter College of Art (now part of Plymouth University) studying Photography and Graphic Design and I became interested in documenting a large organisation and the idea of photographing life in a boarding school came up. As a product of the modern British comprehensive system that seemed to be based on ‘averages’ I was intrigued by what life in a boarding school could be like. Prior to going to art college I had never really met anyone who had been privately educated.

I approached John Rees the Head Master of Blundell’s, Devon’s oldest public school, and amazingly he said I could have full access to the school and I could photograph anybody I came across, as long as they didn’t object, and photograph anything I found. He said there was nothing in Blundell’s that he was embarrassed about. It was an amazing amount of trust to place in a young art student and I was determined to portray as honest a portrait of life at the school as I could.

A school the size of Blundell’s requires a complex support structure and the school is one of the major employers in Tiverton. I wanted to try and show all aspects of life at the School in a sense from the ground up. It was important to me to photograph everybody I met with the same amount of dignity whether it was the Head Boy or a cleaner. I became fascinated with how the boarders would decorate and personalise their rooms with an amazing range of posters and collected paraphernalia.

For my degree show I printed a selection of twenty or so images and I showed these and my contact prints to John Rees. He felt that I had captured something of the essence of Blundell’s and commissioned me to return in the Autumn, once I had graduated, to take some additional images for a new prospectus. I have now had Blundell’s as a client for thirty years, photographing and designing most of the School’s promotional material.

Over the years I have worked with five different Heads and seen a number of major changes at the school; the decision to go fully co-educational in 1993, followed by the opening of the Junior department and then the Prep School.  The school continues to adapt with the times -  but at the core the same strengths and values I found in 1986 are still there.

A few years ago I started archiving my negatives and realised what I had got was quite unique. To be given unconditional access ‘behind the scenes’ in any kind of organisation probably wouldn’t happen today -  but because of the freedom I was given I feel I was able to produce something quite special. It is an historical record of life in a boarding school in the early stages of modernisation. Looking at the pictures is almost like entering a time machine and going back three decades to the mid-eighties with the associated Samantha Fox posters! 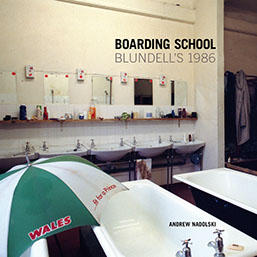 £24.99 + £14.00p&p
Please note: Orders outside Europe will be sent surface mail. If you require  faster delivery please email for details.

Orders will be despatched after 4 November 2016

Website design and all images © 2014 Andrew Nadolski. All rights reserved.